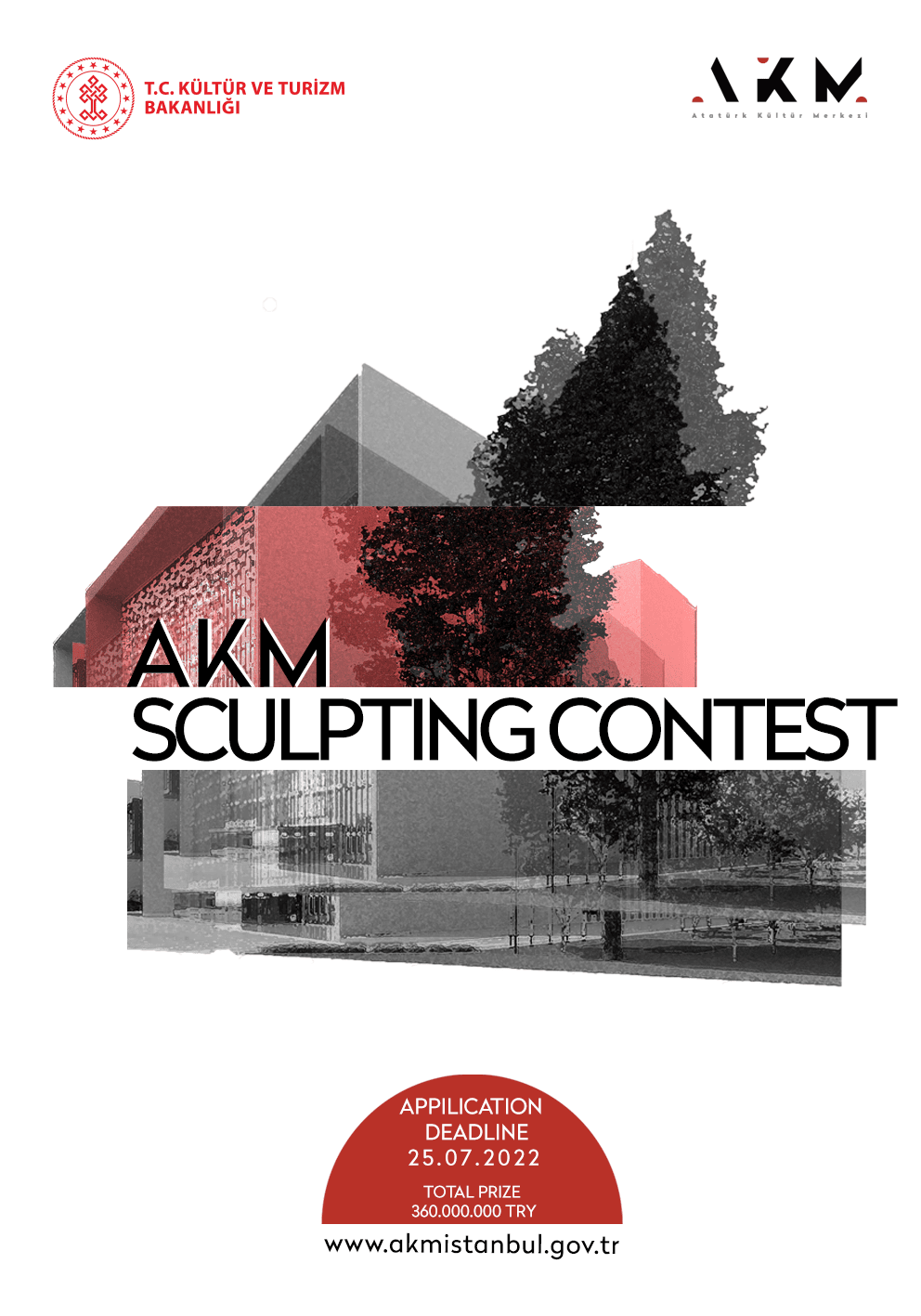 İstanbul Atatürk Cultural Center is one of the symbolic modernization projects in the fields of culture and art for the State of the Republic of Türkiye. it can be said that social values and perti­nent affirmations have found their venue where they can reflect and express these notions in the body of the Atatürk Cultural Center, the architectural vessel where the state's apprehension of culture and art has come to life. All landscaping of the physical environment and the hierarchical relationship between the structural elements are directly linked with the social value judgements. The persistence uphold by Atatürk Cultural Center from the first day of its construction to today, despite the interruptions, for the materialization of abstract notions has had a special meaning.

The history of Atatürk Cultural Center is full of profound experiences where the relationship between architecture, venue, and artworks is productive and immensely intertwined. in this respect, the call for a national contest opened in many categories of art in 1968, following the construction of the centre, has great importance. The call of '68 was made in the categories of sculpting, painting, ceramics, and frescoes; the winner works: two precious paintings by the winners of the painting branch, Oya Katoğlu and Mustafa Pilevneli can still be found in the AKM Opera foyer, whereas the bronze statute of the winner of the sculpting branch, Cevdet Bilgin, is situated near the pool at the entrance of AKM. Similarly, the ceramic panels designed and produced by Sadi Diren, who was also an award winner in the contest, have been among the important cultural heritage of our country. AKM, which welcomes art-lovers today, once again, with its refurbished look, continues to be a pio­neer in carrying over its mission of art, which it has undertaken since day one, to today and to days to come. Enriching this peerless venue of architecture with permanent artworks comes to the fore as an important intention to fulfil this role. in this framework, it is planned to have a sculpture at the front façade of Atatürk Cultural Center that overlooks the Taksim Square, which will integrate itself with the centre and will be perceived from the square. it is expected that the sculpture to be part of AKM's artistic identity expressed in the urban space; to symbolically integrate itself with AKM; and in our artistic journey, to contribute to the modern expression of the relationship to be established by local knowledge and the venue at an international level.
A contest, which is a method that has proven itself to be a participative and transparent approach for the production of an artwork, is also artistically the most exciting one. The decision to obtain an object of art for Atatürk Cultural Center through a national contest is important for the arts com­munity. in the scope of one of AKM's missions, cultural continuity, the current contest to form a con­tinuity with the contest of 1968, whose tangible end products have come down to us today, is also significant.
The contribution of revising the rich and multi-layered local knowledge, the inspiration acquired from the values that have almost become timeless with modern approaches is undeniable. it is in part what painters such as Abidin Dino and Abidin Elderoğlu, composers Ulvi Cemal Erkin and Yalçın Tura, ceramics artists Sadi Diren and Füreya Koral, and architects Turgut Cansever and Sedad Hakkı Eldem have attempted to achieve.
The contemporary work of art enriches itself by establishing a sufficient relationship with local cultural accumulation, which grants it the potential to open itself to new horizons. Such an opportu­nity is also exciting for the artwork which will be the symbol of Atatürk Cultural Center. The commis­sioned artwork is expected to respond adequately to our call to meet our need for the increase in efforts to produce contemporary, high-quality renditions of past experiences and wisdom by making use of abstractions, instead of symbolic, formalist approaches.
The work to be designed is further expected to be a landmark representation that forms an inde­structible link with the venue where it will be situated. Moreover, the work should become a part of the landscape surrounding it, integrate with it, and establish strong dialogues with its environment, especially given the fact that its reserved location faces one of the most important squares of the city.
it is one of our main goals to have a good example of art, whose expression will un ite itself with the urban space, avoiding superficial symbolism and kitsch approaches, which are frequented too many times in the field of plastic arts. 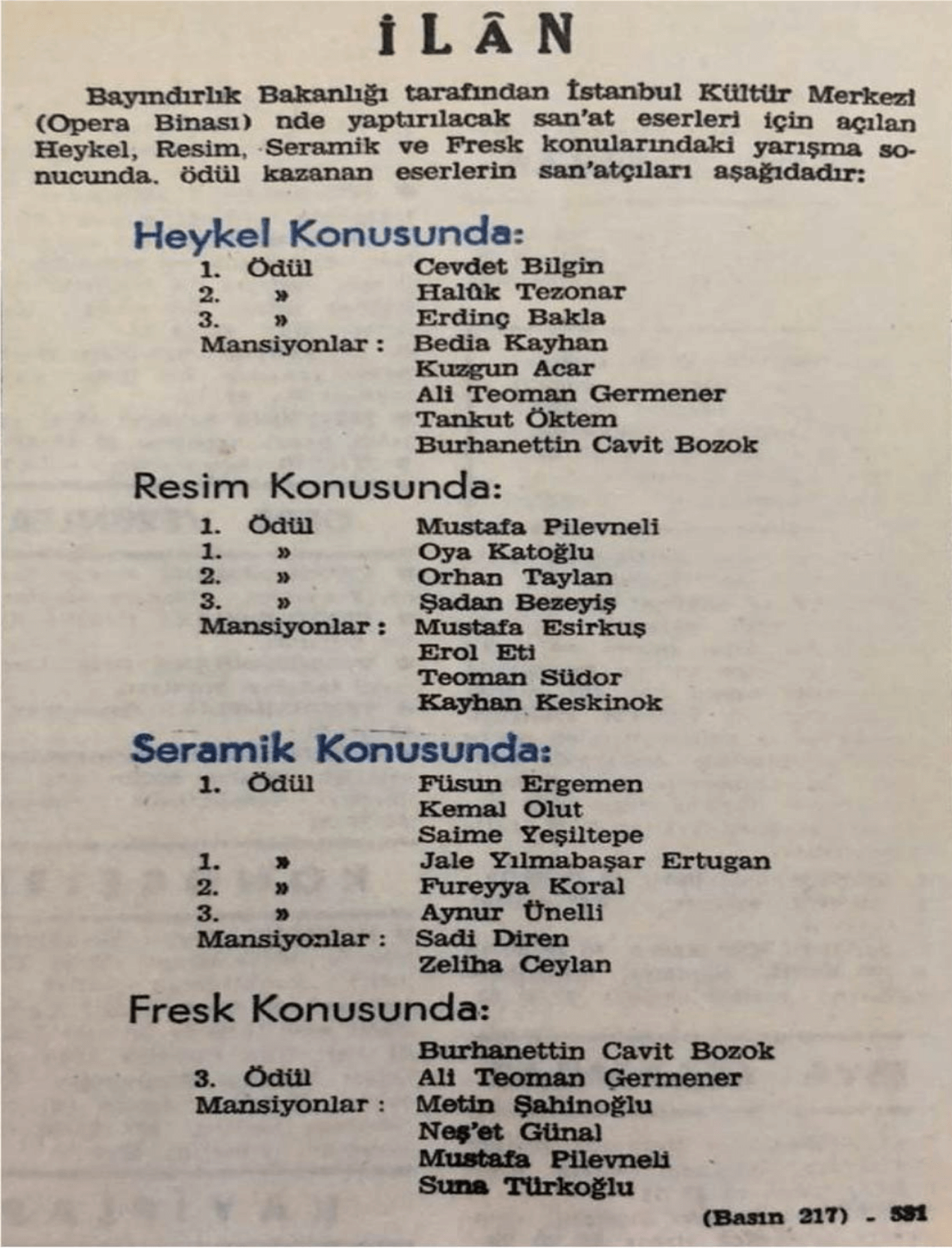 3 equal value Honourable Mention rewards will be granted, des­ignated as

For extra purchases, 120,000 TRY are reserved at the jury's disposal. The jury is free to distribute the purchases equally, in portions it deems fit, or not using the purchase at all.

Everyone who is a citizen of the Republic of Türkiye and older than 18 years of age by the application deadline can participate in the contest.

As long as the conditions for the application are met, it is possible to par­ticipate in the contest individually or as a group.

It is not possible to take part in the competition as a legal body.

Everyone who is a citizen of the Republic of Türkiye and older than 18 years of age by the application deadline can participate in the contest.

The contest participation fee must be paid on behalf of the applicant for individual applications, and behalf of the team respondent for team partici­pation. Company or office name is not accepted.

Each competitor can participate in the competition with a maximum of three designs. A separate specification must be purchased for each application.

It is not mandatory to see locations for the contest.

it is mandatory for the participants to personally submit the models which can be on 1/20, 1/10, or 1/5 scales.

For information, please call the spokesman contact information listed above.