The main component of Atatürk Cultural Centre’s iconic front façade facing the Taksim Square is the Opera Hall, a huge globe that is covered with 15,000 ceramic pieces which have been specially designed for AKM.

Following a set of physical, technical, and architectural analyses, the Opera Hall was constructed in the shape of a horseshoe to procure excellent, natural acoustics. With its high tonal quality and reverberation time, it was designed following the same standards as world’s most qualified opera houses. The saloon was fashioned first and foremost for operas but allows changes in acoustics to suit symphonic concerts and electroacoustic shows. The wall coverings have been specially designed to suit the need of acoustics. As the use of carpets or other textile products is not recommended for opera halls, a wooden floor was preferred.

With its parter and two balconies, the ellipsoidal form was used for the Opera Hall, with a capacity of 2040 spectators. A suitable view angle was provided for the audience from every point. The orchestra pit is 125 square meters and can accommodate an 85-member ensemble.

The Hall’s dynamic ceiling lighting which is covered with glass pieces produced through the blowing method was specially designed for AKM. It operates on a system that hides it inside the ceiling so it would not -literally- steal the stage’s spotlight though it might serve as an accompanying element if needs be, with its command system that ensures that it moves in a way that suits the determined choreography.

Even if a play is being staged in the Opera Hall, the next play’s decorations can be loaded from the backstage area, with the help of a separate elevator, to prepare the venue beforehand for the event ahead. The Hall comes equipped with world’s most prominent technologies, supported through a set of digital and mechanical backstage equipment and through dynamic, changeable platforms. In addition to these, the Hall’s lobby, backstage, rehearsal rooms and artists’ rooms are excellent for comprehensive, organised events. More, it has some rehearsal areas that have been placed under and next to the stage and come in the same size, functioning also as additional stages.

The seats were covered with a flow-resistant textiles to ensure acoustical transmission and absorption, and their lower surfaces were designed using an absorbing material. 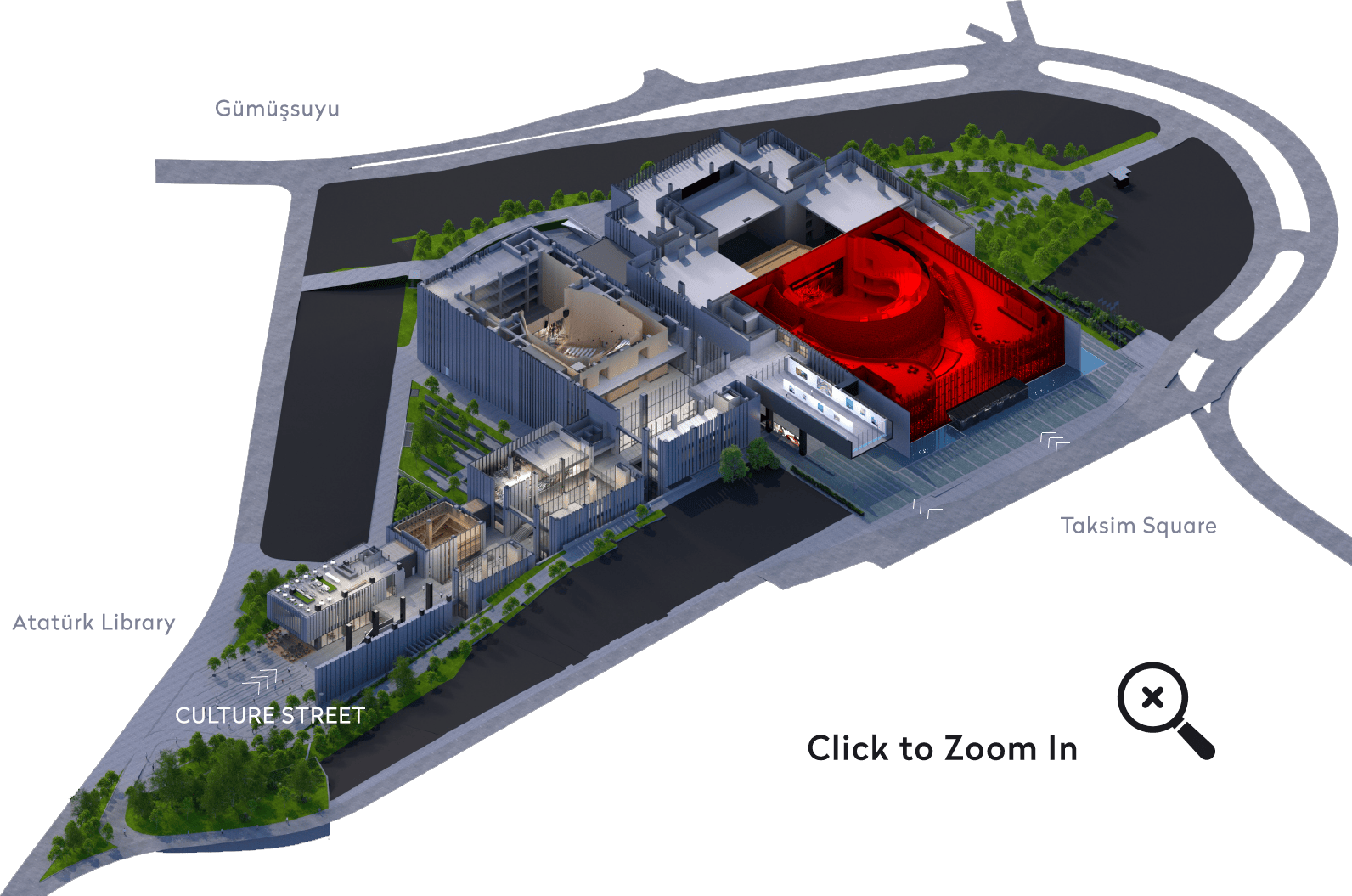 Situated at the entrance of AKM’s Culture Street, the Theatre Hall has a capacity of 781 and has been equipped with the latest technologies.

With its façade overlooking the Taksim Square, AKM Gallery composes a venue that is perfectly suitable for exhibitions.

AKM Music Platform houses two exhibitions and the "Respect to the Masters" corner.

AKM’s Children’s Art Centre has four classes and a shared space that are specially designed for children aged 4-6.

In AKM’s Design Shop are sold souvenirs and products telling about AKM and its works of performing and plastic arts.

Within the body of İstanbul AKM is a specialised library focusing on the fields of music, arts, architecture, and design.

Sometimes a pleasant smell of coffee filling your nose as you leave the theatre hall, sometimes a bar of chocolate that raises a smile before an entertaining concert…

From movies to electronic products, D&R offers a vast catalogue of entertainment and culture products to its visitors.

Divan Group, which develops its modern understanding inspired by the future, has a strong structure which includes hotels, bakeries, restaurants, cafeterias, shopping, and visiting spaces.

Vakko L'Atelier, where Vakko classiness comes together with savour and brings together Chocolate, Patisserie, Bistrot, Ice Cream and Delight flavors, begins its service in Atatürk Cultural Center, the symbol of Türkiye’s cultural and artistic life.